5 Years of Service: The Staying Power of an AniMate 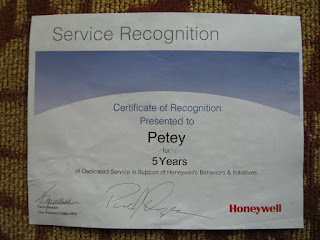 AniMated characters are a powerful communication tool at a meeting.

But the thing is, AniMates do more than make a flash-in-the-pan impact at an event. Even aside from making the content more memorable; reinforcing points through humor and recaps, captivating the audiences' attention and making them receptive to the message--AniMates really *connect* with an audience in an absolutely amazing way.

The certificate that you see in this entry is signed by the VP of Sales and the President of the Division for Honeywell. This is the same certificate that all Honeywell employees get when they've had 5 years of service. This year, they presented it to Petey the Pirate.

Occasionally, clients will use an AniMate one year, and then decide that they have to "do something different" the next year. They're missing the point. AniMates not only become part of the audience--but they're something that the audience looks forward to seeing every year.

I was backstage at this year's Honeywell event. Petey doesn't come out right away, of course. First, the VP of Sales--the host of the meeting--greets the audience and welcomes them to the event, etc. The last line of the VP's opening message was, "But I get the feeling we're missing someone..."

Because Petey the Pirate is no longer just an AniMate. He's not--and never was--just a cheap gimmick to be discarded for the next new event-production fad. He embodied the spirit of the audience. He was their cheerleader, their comrade and their voice onstage in the type of an event where an audience is typically expected to be seen and not heard. He has become part of the culture of that division. 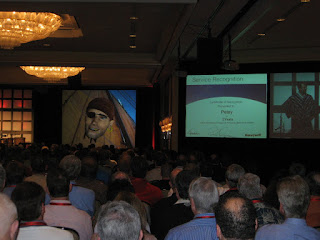 Petey is a prime example of the staying power of an AniMate. Five years and the audience snaps to attention whenever he comes on the screen. Five years and he is able to deliver key messages; both uplifting and the hard truth--in a way in which the audience can relate.

Five years, and Petey the Pirate has received a service recognition.