A Talking Horse (of course, of course) 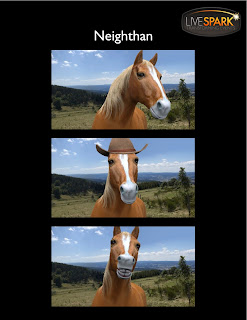 Our client was hosting their annual event--the first User's Forum in 4 years after a 30 year tradition--at Wild Horse Pass in Arizona.

There was excitement all around. The location was beautiful and the event was much-anticipated after its absence. We had previously done an AniMate for the same company's internal show with huge success and many, many raves--so they wanted to bring a little of that magic to the conference for their users.

But which character to use? There are many ways to choose which AniMate is right for your event (we'll get into that in the next blog entry), but in this case they looked to the resort for inspiration.

But as fun as it may seem, one cannot just have a talking horse for the sake of a talking horse. This horse was entertaining and fun, but was also there for serious business. The client had specific goals that they wanted the horse--as co-emcee--to accomplish:

The result? Neighthan was universally beloved by the audience; who looked forward to seeing him. Not only that, but his co-emcee (the internal emcee) described himself as being "like a rockstar". Neighthan elevated the other emcee in his role as well as entertaining and engaging the audience on a talking-horse level. Neighthan was positioned as a fellow forum attendee and user (only from a "one-man town" instead of a "one-horse town"), so he had permission to ask questions, recap product information that he was "learning" along with the audience, and become part of the community.

The next year's event won't be in Wild Horse Pass, but that doesn't mean our client won't be putting Neighthan in his virtual trailer and taking him along for the ride. In just two days, he became a part of the team--making our client look wonderful in the eyes of their users. 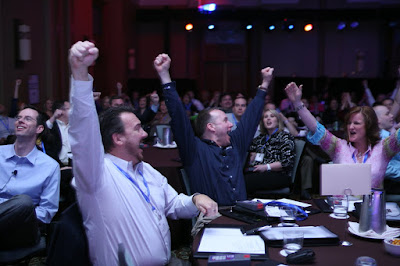 This is what an audience is *supposed* to look like at an event! Totally engaged and cheering (using a custom audience-response game show).
Live Spark
Comments (2) 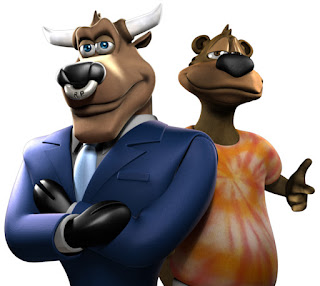 Live Spark is thrilled to announce that "World in Review with Hoofy and Boo" has won an Emmy for Business and Financial Reporting.

Hoofy and Boo are the character creations of Minyanville--a next-generation digital media company that creates branded content to inform, educate and entertain all generations about the world of finance. The bull (Hoofy) and bear (Boo) of Wall Street, Hoofy and Boo are dedicated to reporting the latest financial news of the world in a witty, informed, and often irreverent format.

Hoofy and Boo are brought to life by Live Spark and are examples of Live Spark's AniMates. This unique animation technique allows for quick production on each 2-minute segment--essential when rolling out 2 episodes a week; one for Fox Business Channel and the other for Yahoo! Finance (all episodes are housed and replayed on Minyanville's own site). Episodes are also assembled through Live Spark, and go through an extensive post-production process adding in all graphics, sound and additional media content.

Click here to watch episodes of "World in Review with Hoofy and Boo". 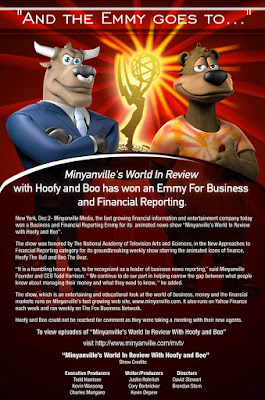 From the Minyanville News Release:

The show was honored by The National Academy of Television Arts and Sciences, in the New Approaches to Financial Reporting category for its groundbreaking weekly show starring the animated icons of finance, Hoofy The Bull and Boo The Bear.

“It is a humbling honor for us, to be recognized as a leader of business news reporting,” said Minyanville Founder and CEO Todd Harrison. “ We continue to do our part in helping narrow the gap between what people know about managing their money and what they need to know, “ he added.

The show, which is an entertaining and educational look at the world of business, money and the financial markets runs on Minyanville’s fast growing web site, www.minyanville.com. It also runs on Yahoo Finance each week and ran weekly on The Fox Business Network.

Hoofy and Boo could not be reached for comment as they were taking a meeting with their new agents.

Minyanville is a next-generation digital media company that creates branded content to inform, educate and entertain all generations about the world of finance.