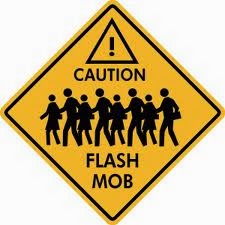 When something becomes part of the public consciousness, we joke that 5 years later we'll be seeing that anecdote/element at corporate events.

For a while, flash mob videos littered social media. Just this year a client came to us: "I have a fresh new idea...we're going to do a FLASH MOB at our sales event."

Eyebrows were raised. Eyes may have been rolled (just a little bit). At this point, it was already a stale trend, but the event world was just catching on.

Why do events lag behind pop culture? Why are we still (now) seeing Survivor-themed events, Harry Potter parties, flash mobs, corporate rap songs, and the guy who performs "the evolution of dance"?

The answer is multi-faceted:

It takes a while for some of these elements to become "safe". After an idea or concept has been in the public eye for a while it becomes less risky or edgy. This is why we see 50 Shades of Grey jokes tossed about at corporate events; it's longevity has dulled the taboo. That might be a very specific example, but things like corporate raps, dance groups, etc., were once considered risky or counter-culture and have now made their way into the relatively sterile environment of the corporate event without the teeth that gave them their cultural bite.

Social and peer proof is strong persuasion. Event professionals, naturally, have varying levels of risk tolerance--just like any other professional group. However, when one is putting on a large event with a large budget, one tends to go with tried-and-true solutions. Social proof--seeing an element be successful at a smaller event or even a similar event--is a powerful contributor to trend elements. Therefore, when one group utilizes a flash mob and they are asked for recommendations, the flash mob trend is passed to another group and so on. This can cause a ripple effect for several years--making a "trendy" element show up in the weeks and months and years past its freshness expiration date.

A lot of event planning is done years in advance. That being said, a lot of companies have a 1-2-3 year event plan, and popular speakers must be booked well in advance. That trendy Olympian from Sochi still has a good story, but their keynote doesn't seem fresh, new or topical anymore.

So what's an event planner to do?