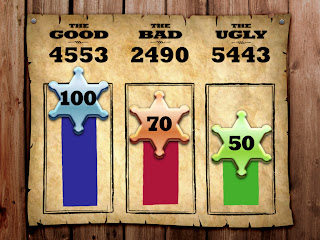 Situation: Toyota wanted a way to engage and entertain their top sales reps while at the same time testing their company knowledge and giving them the opportunity to earn some big rewards with that knowledge. This was a great teambuilding event in the morning; it gave the audience a chance to compete on teams and individually and allowed them important, low-stress face-time with top executives.

Toyota had already used a game show the previous two years—both times utilizing either our sister company--LearningWare's--software (Gameshow Pro) or custom software programmed for their event by Live Spark. They wanted something to fit their Clint Eastwood “Western” theme and that would add variety from previous years’ play. 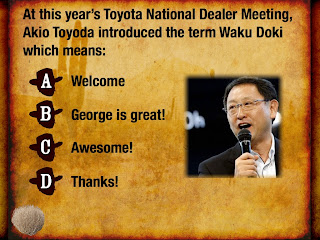 Solution: A custom Fistful of Dollars game show with three completely unique varieties of game play. The audience still played along using audience-response keypads, but there were a few variations:

Target Practice: In this game play variation, we asked extremely difficult multiple choice questions. The audience members, consequently, had three opportunities to get a question right.

The question was be asked the first time, and the audience saw what percentage of their team responded correctly. They did not know whether they—individually—answered correctly. They then got a chance to answer again—and they could either change their answer or stick with it. Again, the percentage of correct answers was be shown. They got one final chance to answer the question, and only their third response counted as correct or incorrect.

Do You Feel Lucky Punk?: (Wager Round) In this game variation, we utilized a team leader—someone with guts, daring, and willingness to take the glory or the fall.

Everyone on the team was shown a question. Before the audience votes, the team leader decided whether he/she thinks that 75% of the team will know the answer or not. If he/she is confident, then they’ll bet high. If not, they’ll bet low.

No guts, no glory. The team leader wrote down or verbally submitted their wager. The question then played out as a typical audience-response question. 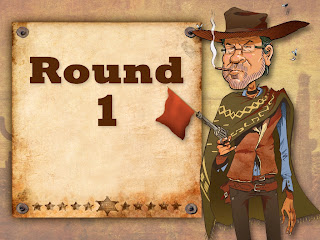 Six-Shooter: (Speed Round/Final Round) Teams were asked a group of 6 questions—rapid-fire-style. They were NOT shown the team results of their answers until after the questions are done, at which point the team scores rose (and failed to rise as much as they should) dramatically, determining the final winner.

Results: The game show was entertaining, challenging, tough, competitive and held a level of novelty—being different than the year before. The audience was engaged with each other and management for the entire morning.