Voting with a Smartphone: What could go wrong? 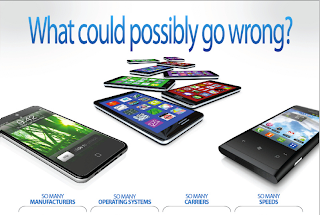 We found an email in our inbox with the intriguing subject line: Smartphone voting for your next event? What could possibly go wrong?

Since we've been using various audience response pads for large audience-wide games--and have gotten some pushback from people saying, "Why can't everyone just use their phones--why do we have to have separate pads?" this email was intriguing to us.

We expected to find a new solution; a foolproof way to incorporate smartphone voting--maybe ensuring that concerns like connection strength in a hotel ballroom were addressed and mitigated. But alas, what we found are succinct and compelling reasons NOT to rely on smartphone voting that we've been trying to put into words all along.

Basically it comes down to 3 main points that are tough to regulate--unless everyone has a company-distributed phone (and sometimes not even then).


We would also add: For years, the opening messages of meetings have included the phrase: "Please turn off your cell phones...." Obviously if you were using smartphones as a voting device you would not include this message word-for-word, but the original purpose for this message is lost. You don't want your audience to be surfing the web instead of listening to crucial content. You don't want them checking their email when they're supposed to be participating in a teambuilding activity. You certainly don't want the harmonious chimes and dings of alerts, updates, messages, texts and phone calls sounding off in the middle of your meeting either.

When you want the audience to focus on your event and you're trying hard to engage them (with, say, an audience-response game) you don't want to put the number one distraction device (smartphone with internet, email, games, etc.) in their hands and tell them to have it turned on and logged in.