4 Ways to Hamilton Your Event. 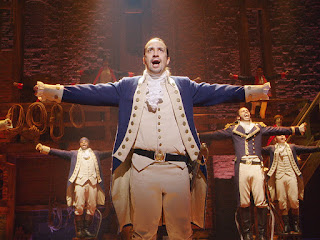 I know more about Alexander Hamilton now that I ever learned in school.

I've caught friends casually humming the details of Hamilton's life--hard, historical facts in catchy song form. It's all because of the smash-hit musical Hamilton. The music of Hamilton is sticky, and so the facts of Alexander Hamilton are sticky.

I still know the states and their capitals, the nations of the world, and the order of the presidents of the U.S. because Animaniacs (a 1990s cartoon) set them to music and put them in the show. They were catchy and they stuck.

A while back, a client was launching a new version of their software and we set the launch details to a parody of "8 Days a Week". Everyone at the company STILL remembers and sings that song.

Music is a powerful tool for incorporating information into an event.
Music is:
Putting your messaging within a musical format makes it all of the above--plus adds an element of variety and novelty. So how do you use musical messaging within your event?

1. Musical Wrap-up
Music to review the content of the entire event is a memorable and pleasurable take-away. Attendees can see how the things they've just experienced are cleverly summarized into song form. This also allows you to end the event with a bang instead of just fizzling out.

Quite frequently we will end an event with a version of "Favorite Things" (recapping the highlights of the event) or "Wonderful World". It makes an emotional impact and is a great way to review content.

2. Musical Opening
A lot of companies will do a big musical number to open an event: drumming, a local band, gospel choir, etc. This is a great thought--but you also want the music to have meaning. Set the tone of the event with lively music, but also begin to incorporate messaging. It's a fantastic way to preview your content and generate interest for the event ahead.

We recently opened a client event (called "The Forum") with a musical parody of "Be Our Guest" (with "be our guest" replaced by "to the Forum"). It set the tone for a lively event and gave out information on the agenda that would follow.

3. Musical Intros-outtros
A musical opening is great, but doesn't always have the impact it should if the presentations don't also live up to that standard. A good way to incorporate content-driven music is to have a summary/intro in between each presenter.

At an event we had a local rapper listen to executive presentations and then create a spontaneous rap that encapsulated the main points of their presentation. It was great reinforcement, but it also helped sustain a consistent level of energy throughout the event.

Note: Like quite a bit of music, rapping is best attempted by professionals or semi-professionals. Have executives rap at your own peril.

4. Attendee-Generated Music
Music is largely universal and attendees will benefit by being allowed to participate in the marriage of content and music. There are several ways to do this. Teambuilding activities can include coming up with a team cheer or song, or attendees can be tasked with summarizing a specific, assigned presentation in song parody form.