Prudential Relocation Services hired Live Spark to produce a game show for their national event. Here is what they did to make their game show a success in a large group. 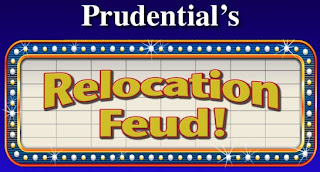 The audience of 250 people was divided down the middle. One half of the room would be on a team, and the other half on the opposing team. Five game show contestants for each team were pre-selected to come and play up front. An engaging game show host led the teams through the rules and game play; teams had a face-off question to determine which team would get to answer the question, and then the “playing” team tried to uncover all the answers on the Feud board. Pre-determined judges stepped in to give rulings on potentially controversial answers. The winning team went home with “prizes”—the shampoo, conditioner and body lotion in their hotel hospitality kit. 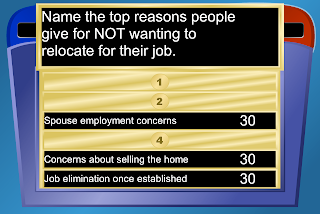 Pre-selecting contestants: Because contestants were pre-selected, it was assured that they would be willing participants. This also eliminated the potentially messy process of trying to gain spontaneous volunteers. Contestants, however, were not “plants”, and did not have prior knowledge of the game show.

Having a designated host: Having a separate host aside from a “tech” running the game show made sure everything was smooth and seamless. The host could concentrate on engaging and working with the audience and contestants, and the game show tech could focus on running the software without a hitch.

Pre-selecting Judges: We’ve always been huge advocates for having judges during a game show. This way, when there was a controversial decision, or a team gave an answer that was close (but not quite accurate) the host and game show tech didn’t have to enter into the fray.

Inexpensive Prizes: We love the idea of using the hotel hospitality kit as a “prize”. It’s a fun way to give contestants something (and everyone in the audience something) without spending a lot of money on prizes that only increase competition and game show scrutiny. Everyone in the audience on the winning team got this prize—so everyone was cheering along.

Good Questions: The questions were neither too difficult, nor too easy. They were compelling, clear and easy to read—and still provided entertaining, relevant review information.

What Could Have Been Done Differently 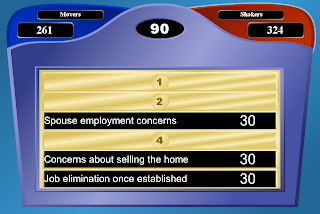 Consistent rule enforcement: While rules were explained beforehand, and contestants were generally good at following the rules, at one point the host became lax on a few points. Instead of individuals having to guess an answer, teams started to collaborate—which increased the game time and added to a level of chaotic play on stage.

Timers: Answer timers were used only infrequently. This made the game show lag a bit. Teams got used to the idea that they could take as long as they wanted/needed to answer a question instead of answering right away. This led to more discussion and collaboration amongst team members, but lessened the entertainment experience for the audience. 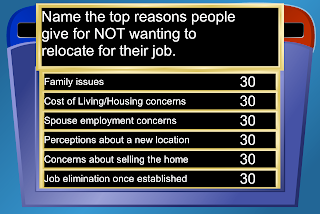 Both the audience and the Prudential Relocation Services team were very happy. The game show was used as an after-dinner entertainment piece, but it also helped cement the content from the presentations earlier that day. Overall, Feud and the game show set up was an amazing success.