How to focus your presentation with a game show. 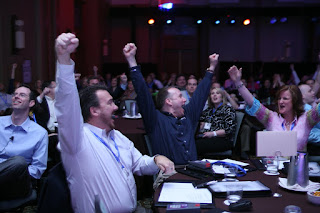 Game shows are a phenomenal way to engage your audience. They add an element of competition and fun to a training session or large-scale event. However, game shows do more than benefit the audience--they also provide a huge benefit to the trainers; focused content.

Recently we designed a game show to run throughout a 45 minute training session with audiences of about 50 people. Three different companies were presenting content, and sessions were repeated multiple times a day, over many days. We had an opening game show round, a closing game show round, and rounds in between the presenters' content.

What we noticed, as the sessions continued on the first day, was that the presenters were starting to highlight those Very Important content points even more. They would refer to their content in the context of the game; "Now pay attention to this because you might need to know it later...wink-wink..."

In subsequent sessions, they pared down their presentations to have a laser-focus on the key points. The overall sessions were improved beyond the engagement of the game show.

Game shows help you focus your presentation because:

1. They show you what is nice to know vs. what you need to know.

Obscure trivia is fun for are-you-smarter-than television shows. We're all impressed by that person who can answer with the most inane detail. However, training isn't trivia night. Questions that are difficult because they contain the most irrelevant detail (that no one remembers because it's irrelevant) not only slow down the game play, but they also are directing your trainees to the wrong content.

Having to come up with a set of game show questions allows you to sort the nice-to-know from the need-to-know.

2. They help you pare down your content to a limited number of points.

A training session or presentation has a limited time frame, and it's extremely common for presenters to try to pack in as much information as humanly possible. Often times, this comes at the expense of interaction ("Well, we wanted it, but we just didn't have time for it."). Having dedicated time for the game show review not only ensures that there is interaction time built in, but it also helps presenters narrow the scope of their presentation.

In the 45 minute session described, there were three discrete presentations. Each presenter only had time to reinforce 2-3 key points, so they were able to have extremely focused, relevant content and supplemental game show questions that reinforced and reiterated that content.