We use a lot of game show formats in general sessions: they're a great way to engage a large group, entertain the audience, and increase content retention. However, they are also a fantastic addition to breakout sessions; the smaller format can be customized to suit the needs of a trainer and create incredibly lively, effective workshops.

What follows is one example of Live Spark creating a custom game show to suit the needs of the trainer.

Summary: Seagate needed a way to engage their audience in traditionally dry breakout sessions. Live Spark created three different custom audience-response game shows that were played in each of the three breakout sessions throughout the session. The games were not only well received, but the audiences’ attention and retention of the material soared; as did the energy of both the presenters AND the attendees.

Overview: Seagate was getting all their local and international sales reps together for a large annual event. Part of this event included 90-minute workshops training on everything from product roadmaps, to new product introductions and sales strategies. Audience members cycled through the four major workshops in regional groups; from the Americas, to Europe, to Asia to Canada.

Issues: The extended workshop sessions were trying on the attention span of the attendees. A large amount of very important information needed to be presented, so presenters were scheduled back-to-back, giving attendees very little time to process and absorb the information. This was not conducive to learning.

Pile on top of that the fact that a lot of the material was very technical and could be dry. It was a recipe for attendees to check out of the breakout and check their Blackberries instead. 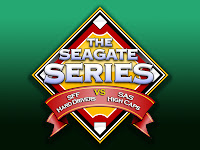 Solution: Live Spark designed three unique audience-response game shows that took place throughout three of the breakout sessions. They were a baseball-themed game, a quick-quiz game, and a “Get Smart” game.

Each audience member had a keypad waiting for them when they walked in the door. Depending on the game type, audience members were either playing individually (with the score of the highest keypads winning the game) or on teams. The games were introduced first thing, and a sample question was played.

After every presenter, a game show session took place. The content for the game show was based on the presentation the attendees had just heard—with the exception of the final round at the end of the workshop; which was a compendium of questions.

Why it worked: When the first question of the first round was played, and the audience found out how they scored in a dramatic, building fashion, the room erupted into cheers—led by the team with the highest score on that question. The energy, instead of draining with each progressive speaker, was refreshed and renewed in between every presentation. Not only that, but speakers highlighted the content that was going to be in the game show later—bringing out key points that were reinforced through the highly emotional game show experience.

Because game shows are a somewhat-universal medium, there was no difficulty getting even international groups to play along. 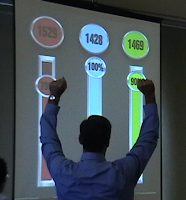 ”I didn’t believe you when you said they’d start cheering with the first score,” an event organizer remarked, “But this is simply amazing. Everyone is engaged.”

Audience members, knowing the next workshop was going to contain a game of some sort, were a-buzz in the hallways, talking with their peers about which session they had just come from; what game they played, who won, and which questions stumped them.