Cartoons in the Senate 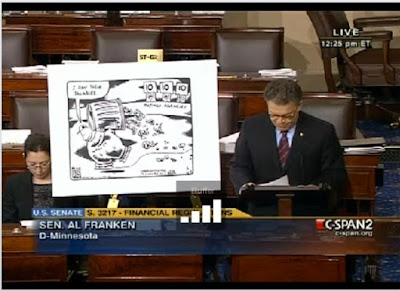 The internet is somewhat up in arms about what is seen in the image above--Senator Al Franken using a political cartoon to illustrate a point during a speech on the floor of the U.S. Senate. The editorial cartoon pointed out a problem with an existing financial bill that Senator Franken's proposed bill will solve.

Now, we're not touching the political aspects of the cartoon, proposed bill or Al Franken. What we *would* like to comment on, however, is how effective the showing of the cartoon is in making a point and as a presentation tool.

True to the form of editorial cartoons, this illustrates the crux of the issue in a highly visual manner. Senator Franken was able to leverage this to make a point that the public can easily relate to. Instead of trivializing the issue by being a cartoon--it highlighted his presentation in a way that was clear and engaging.

We've seen similar cartoons make their way into keynote speeches. Besides illustrating and highlighting particular points, they also make the audience stop, laugh and pay attention. The absurdity, the humor, the visual format all combine to make them an incredibly effective tool in a presentation.