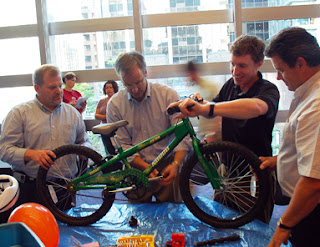 It seems like, these days, everyone is doing a charity bike building team-building (or team-bonding, depending on how much vernacular you want to employ) component in their events. Heck, the recent scandalous G.S.A. event featured a $75,000 bike-building portion (which worked out to be $3k a bike...those must have been some very nice bikes).

Watching trends in team building is interesting to event professionals. Multi-day meetings have traditionally reserved an afternoon "outing" so the audience could have some non-event "reward" time. This could be a golf tournament, a spa afternoon, some deep-sea fishing...whatever. This was well-intentioned; the audiences were faced with hours of intense workshops or general session content, and in a meeting generally devoid of one-to-one content, interaction and networking (that didn't revolve around the bar) was needed.

However, this type of team building was seen as lacking a true business purpose, and as belts tightened it became more and more frowned upon. Meeting planners were faced with a dilemma: give the audience a chance to relieve stress and network--but with a business purpose. Team Building was born.

And then came ropes courses, build-a-bikes, scavenger hunts... you get the idea. It reflects an unfortunate team building trend--that it's something that is plugged into a meeting as an a-la carte element instead of something consistent with the whole. Not that the charity purpose is bad (it is absolutely not, and could definitely be part of a company's ongoing mission) it's just that people are not utilizing the full potential of team building.