Hey! Keep it Down in There! 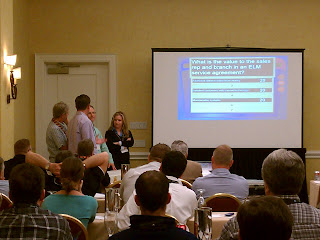 Large events often have discrete breakout sessions. These have varying levels of success and interaction--just because they have a smaller group doesn't automatically make them more engaging. We recently helped a client bring a game show in their educational workshop to help fix this issue.

This session was part of a multi-day event, and attendees could sign up for any session that they so chose. Groups would rotate after a set amount of time--giving attendees the opportunity to be in more than one session and making the presenters give multiple presentations with the same content.

When our client came to us, they were concerned about the interest level of their content. This was a sales group we were dealing with, and they had heard all about the new customer management system (the topic of their workshop), but they weren't adopting the technology as the sales leaders had hoped. So how were they going to generate excitement around not-new information?

With a game show, of course*!

The workshop ended up being structured like so (game show sections in italics):

We divided the audience of ~60 into two teams based on the complex criteria of being either on the left or right side of the room. For the game show, every member of the audience had their own keypad and entered answers individually--the percentage of correct answers going toward their team's score. We also had a Feud-style portion where we took several volunteers from each side to come up and play for their team (while the audience cheered them on).

The entire session ended up being about 90 minutes--with games interspersed to keep the energy high. 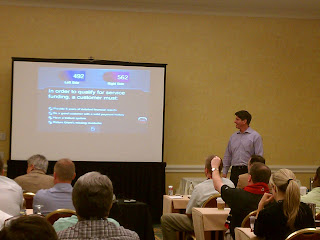 And boy, was the energy ever high! Aside from a marked increase in attention to the content (just in case anything came up in a game), and retention of the content (as seen in tracking their individual responses) there were two stand-out results:

1. Since the workshop breakout rooms were beside each other at the hotel, you could hear the game being played in other classes. Not the game sound effects, mind, but the cheering, encouragement and general good time. One of the other leaders--jokingly--asked the facilitators to "Keep it down in there!"

2. As a result of the energy spilling out of the room, spontaneous attendance to the workshops increased dramatically. The client had people come up and say, "I know I wasn't signed up for your class, but do you have room for one more..." People *wanted* to come in and play, because it sounded like there was life and energy in the session. It attracted quite the crowd, and as a result MORE people received and retained the information than would have otherwise.

The game shows were a great success. Both the presenters and the audience had a tremendous amount of fun--but it wasn't fun without a purpose. Most importantly: the audience walked away with the message.