Dan Yaman will be speaking at this year's SPINCon 2019, November 3-5th in Monterey, CA. Dan's session will be on November 4th, and you don't want to miss it! 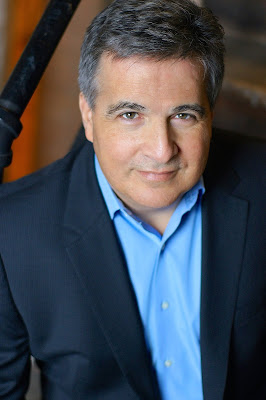 I'll Take Learning for 500: Using Gamification to Engage, Motivate & Train
Dan Yaman - Live Spark
During this fun and engaging presentation, Dan will show how embedding gamification throughout an event dramatically increases audience engagement, enjoyment, and emotional impact resulting in a higher content retention and ROI.
Dan will outline several different strategies: Large-scale game shows, audience-response technologies and team competition. More importantly, the session will take the form of a game so the audience can understand why they are an effective solution to any event.

BONUS: Each participants will receive a copy of the training industry's best selling book on game shows: "I'll Take Learning for 500" as well as a 6-month license to Gameshow Pro Go which lets meeting planners create their own Jeopardy or Family Feud game on their computer.

Recently, Dan Yaman, President and CEO of Live Spark, was quoted in MPI magazine; highlighting how events must be interactive to be effective.

“Studies point out that the emotion does not have to be from the material that’s being presented, but it has to be generated in some way,” he says. “Being able to create a level of emotion through increased engagement and interaction is the biggest trend we’re seeing among our clients: How do you keep the audience at a peak state and create a fun experience?”

“PowerPoint [presentations] should be clear so as to enhance what the presenters are talking about—anything else will create an overload situation, where the brain shuts down,” Yaman says. “Get the information honed down to what is absolutely critical. Make that information really meaningful and ask, ‘What do I want the audience to do after they leave?’ Make sure everything’s aligned to achieve those outcomes.”

“At events, everyone focuses on the presentation phase, without fully preparing the audience,” Yaman explains. “We’ll spend a half-hour before bringing out the first presenter—even if he’s the CEO—to get the audience totally set up for success.”

By doing this, the audience is more likely to receive and retain the information, he says.

“Evoke a need for the material that’s being delivered by creating curiosity and a strong buy-in from the audience so they’ll really focus—put the responsibilities for the takeaways on the audience,” Yaman advises. “We say, ‘This could be the most powerful two days of this event. Are you willing to step up and put it all in?’”

Keep the Energy Alive
Next, control the room and the audience’s state of mind to keep attendees engaged by switching things up.

“If they go vacant, the client’s message is gone,” Yaman warns. “At four- or five-minute intervals, present the same information in a different manner: Tell a story, show a video, do a case study; just keep it alive.”

One way he accomplishes this is by occupying the moments between presenters with relevant, on-screen questions and arming the audience with remote-response keypads.

“It’s a shot of adrenaline that helps re-engage and re-energize the room for the next presenter,” Yaman says.

Live Spark also threads gaming elements throughout the entire event—as opposed to scheduling a single team-building challenge for one day—which fosters emotion while building upon education with quizzes pulled from presentations.

Yaman says. “We want people to be sitting at the edge of their seats, having a good time,” Yaman says.

He believes AniMates—computer-animated characters that show up onscreen throughout the event to interact in real time with people onstage—can greatly increase content retention and comprehension.

“It’s not the sophistication of the equipment—we could do the same level of engagement with a sock puppet,” Yaman says. “If you know how to create a rapport with the presenters and, more importantly, with your audience, these characters can break down complex issues into simple, relevant chunks that everyone will understand.”

Live Spark recently introduced Eddie the Eagle as a mascot for a heavy equipment company in South Dakota. Eddie voiced the audience’s concerns through live interactions with presenters while keeping the audience engaged.

“We’ve done studies for Gartner and found that the biggest indicator of whether someone thought something was successful was how much interaction they had with the other people in the audience,” he says. “A lot of learning happens in the moments when presenters and participants can interact with each other. Create different tracks so that people can go after what they think they need.”

Read the rest of the article "Learning by Experience" on MPI's website.
Live Spark
Comments 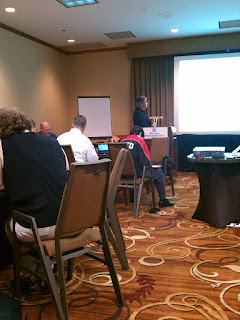 Recently a client attended an industry event where Dan Yaman spoke on how PowerPoints are usually used at events in ways that are counter-intuitive to learning.

The client challenged us: Is there any way to use PowerPoint WELL?

The answer is yes. PowerPoint has gotten a bad rap from many years of ill-use and abuse. It's a stalwart tool, but it's taken a beating in the popular event culture. PowerPoint is evil. PowerPoint is how you kill learning. Death comes by PowerPoint!

Not exactly. PowerPoint is a GREAT tool. IF you know how to use it. 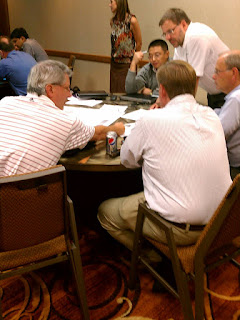 Here is a broad-brush overview of the brain: 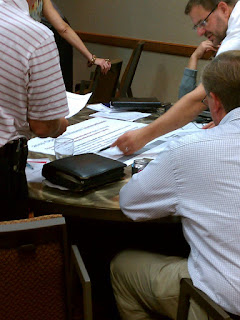 The brain does not respond to:
Visual clutter
Confusing data
Excessive words on a slide
Irrelevant material/words/content
Typical PowerPoint presentations

So how did we go about showing the participants of the workshop how to create powerful PowerPoints? By giving them a hands-on experience with a deck. We printed out large PPT slides on paper--real slides that we had been given by a client.

The first step: Look at one slide and discern the main message points.

Third step: Think of a way to portray the same data on clearer, cleaner slides.

What happened was that most people came up with 3-4 clean, visually impactful slides in place of one cluttered slide. There was much tittering and taboo-whispering; for these participants had long been taught that they could only have X slides per deck--no matter how much information they had.